Today it was Time To Tölta or as we say in ABB, TTT. All expressions that are even worth bothering about should have it’s own three letter shortening. That is ABB standard rule and regulation. 😉

Here we are again, the same procedure as every morning, standing at busstop number 5, waiting for the pickup.

The cowboys are ready

Only a short ride from Reykjavik, around 30 minutes in the bus, we arrived to the farm Eldhestar. Once here, everything went very smooth. We got all the necessary gear like helmets, rain coats etc. Our guide was Kalle, a guy from Sweden, who has worked at the ranch every summer for the last five or six years ( I think). We were seven in our group, us four, then a couple from Las Vegas and then our guide, Kalle. 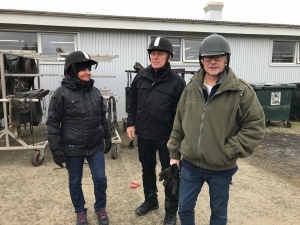 The Icelandic horse has one or two extra paces (way of walking/running). It is called “tölta” in Swedish. So the fifth pace is “tölt” and the sixth pace is “flying tölt”, which means tölta but really fast. All our horses were very calm and relaxed. And Kalle told us to let them walk right behind one another. They are used to that and they do not get irritated, like other horses might. My horse was anxious to keep connected to the horse in front of him so he was very easy to get to “tölta”. 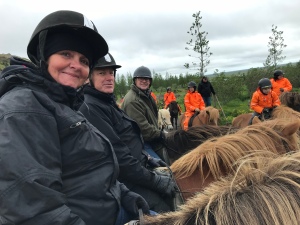 All are so happy thinking: I got the best horse!

Here we are, the whole Icelandic Riding Eldhestar Team. We had a really great day, I love going horseback riding. The funny thing is, we NEVER do it at home, in Sweden. But we close to ALWAYS do it on vacations. How come?? We could do it in Sweden as well. They even have Icelandic horses quite close to where we live, at Ängsö. At least they used to have tours there earlier (I googled it and the home page seem to be “gone”). 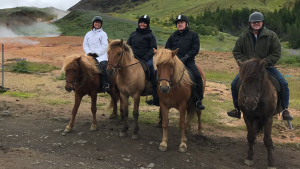 Our tour lasted for around 2,5 – 3 hours and then we got back again to the farm. No-one had fallen off and we were all very pleased with the tour.

Yeey, we survived the adventure

Strolling in the city and some pub crawling

The rest of the day we had nothing special planned. We booked a dinner in the hotel restaurant, which we later on cancelled.

You might think this is from The Muppet show, but it is just Rebecca and Jörgen

Since it is so chilly in Reykjavik you can any time, any day go visit a pub and have an Irish Coffee (as if an excuse really is needed to do that)!? 😉

Next stop was at another bar/pub and there we had the happy hour red wine. Happy hour price was the same as in our hotel bar, 900 IK instead of 160 IK.

All of a sudden we felt hungry, looking at all the burgers the waitresses carried around in there, so we decided to stay for dinner. We cancelled the hotel dinner reservation and had a pub burger dinner experience. T’was GOOD. 🙂

Håkan Juholt and the Cadillac orchestra

Walking through town, back towards our hotel, there was this man that all of a sudden came out of a building where music where playing, asking us to please come in and listen to an old rock’n roll band. Some famous guy that had played in Elvis band was there. I told the guy he did not have to speak English, that we were from Sweden, so he switched to Swedish. He invited us to come in and listen for a while, no fee needed, so we joined. Then Jörgen said to me: You see who this is right? And I said, he looks familiar and Jörgen said: It is Håkan Juholt, former party leader of the Social Democratic Party. The Cadillac Band from Sweden were playing some good old rock’n roll music so we stayed for around half an hour. Very nice actually.

This evening was Ted and Rebeccas last evening in Reykjavik, they were smarter than us and left after 4 nights, which means saving at least 8000 SEK which would have been the extra fee for the hotel only. Visiting Iceland is expensive, OMG, I could have bought some good old stocks for that amount of money! 😉 But we had a plan so we stayed two more nights in the hotel so we waved them off and then went to bed.

What the plan was? Well, just continue reading…