Today we have absolutely nothing planned, it will be a “whatever-we-feel-to-do” day in Melbourne. Our hope was to get massage and maybe do our nails, but we did not find any appointments that fit us.

Had a toast, juice and cappuccino BF at The Winehouse. It was perfect! The fresh orange juice was great, with ice and without pulp, just the way I want it. ☺ Inside the shop they had a complete wall with wine bottles, soooo many and they arrange wine tastings. They have a webshop, as well. 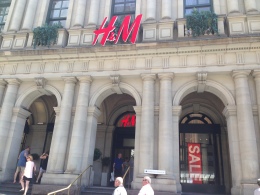 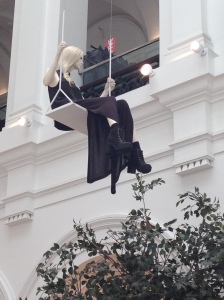 The store is huge and so are the lamps

The huge HM store in Melbourne
After BF we went to the HM shop. Jossan heard that is it amongst the largest HMs around here and it was really big. It is what they call, the Australian flagship store = the largest in AU of the HM shops. Jörgen followed us there but then he realized that this was turning into a REAL shopping day and then he said Bye Bye and went on his own little adventures. Jossan and me continued to do some more shopping. I bought a scarf at HM, a black scarf with some wild animals on it.

What time is it? It is Prosecco time!
After some shopping we felt that the time has turned into Prosecco time 😉 and then we ended up at a really nice place, Xxxxxxx (my memory fails me). We ordered Prosecco and Jossan took a pumpkin salad and I had some grilled Chilli and garlic prawns. OMG, it was a heavenly combination.

What time is it? It is Prosecco time! 🙂

Massage and nail fixing
After lunch we continued to a shopping centre, quite large. Our plan for this day had been to either get a massage or do our nails, but it seemed that this would not be possible since everything was fully booked due to the fact that today actually I New Years Eve. BUT… at the shopping centre we found both massage, so we both took a one hour oil massage and then just opposite, we found a place where they did nails, so we got our nails done as well. Haha, it was just perfect. 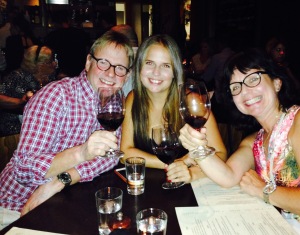 Dining at La Citta
In the evening we went to La Citta, a little restaurant I had booked after Jossan freaked out about having to do everything. I looked it up on TripAdvisor, it was not amongst the top grade restaurants, actually I think it was around number 207 out of more than 3000 places. But if you see it in comparison to that number, 3000, then it had a really good grading. And it was VERY GOOD. A nice little personal. The waitress was very good, took care of us perfectly, so service minded and positive. We drank some very good wine, Jossan drank Prosecoo of course, and I had a Bay Bug Risotto. OMG, it was delicious. And I LOVE risotto. And seafood. 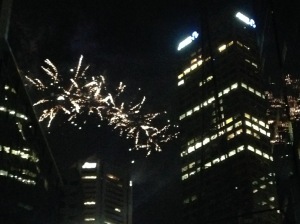 Firework for us and half a million other people
We left the restaurant and looked up the perfect spot to see all the fireworks. We sat on the side walk and waited and had the cutest little boy ever running around us, chased by his parents. Jossan close to wanted to adopt him, hehehe.

They had some really impressive fireworks in Melbourne. A total of 10 tonnes of fireworks were launched from 17 rooftops and other sites through the night at the family fireworks at 9.30pm and the midnight shows. And luckaly the temperature dropped from 39 degrees to a pleasant 27 degrees so it was a lovely evening.

So, once again we were about the first in the world to celebrate New Years. The last time was when we visited Josephine in Sydney a few years ago.