Woke up at 06.00 and now my cold is REALLY bad. I am sneezing and snoring and coughing and have a terrible headache. Also have to wear my sunglasses all the time since my eyes are so very “light sensible”. BUT, enough about me and my sickness, There are people having a much worse time than me. Jossan, that is. She had surgery at around 09.30 today. They took her to the theatre (they call it that here, the place where they do the surgery), opened 3 small holes in her tummy, removed the infected appendix and could also see that an area beside the appendix was infected as well. SO now she is officially the second person of the Wallin family to have the appendix removed at the hospital of Rotorua. Ain’t that some kind of coincidence?!

Jörgen and me visited her at the hospital at around 11.30 (by then she had not even returned from the awakening area) and we stayed there until 13.00. She was asleep almost all the time, just glancing up on us from time to time when we spoke to her. So tired!

We then went shopping at Countdown, some fruit, juice, water, salami etc. and then we went to the camping area and had a light lunch. I took a nap after that and then woke up one hour later with a terrible. On Jörgens advise I took two treos and then the headache actually went away.

We went back to the hospital at 5 o’clock and then we stayed with Jossan until 19.00. They really do take good care of her. There are nurses there all the time, checking her up. I told the story about my brother and Jossan, both from Sweden, had the appendix removed at the very same hospital in Nez Zealand just with a difference of approximately 25 years. She then laughed a lot and said to us, with a nod in a direction of a really old nurse, that it might also have been the very same nurse that took care of both of them at that hospital (since her colleague had worked there for more than 40 years) but her colleague did not appreciate her joke AT ALL. She just kept making up the empty beds in the room, not even a smile on her face. Hahahahahaha. But all the rest of us had a really good laugh. Such a good story! ☺ 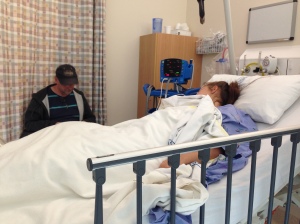 Passed by Pizza Hut after the visit at the hospital, ordered Hawaii, pineapple, mozarella and ham, and then we drove down to the lake and had our pizza and some beer there, overlooking the lake and many, many swans. Couldn’t even count them, but there was a lot of them. Not white swans but some kind of greyish colour. 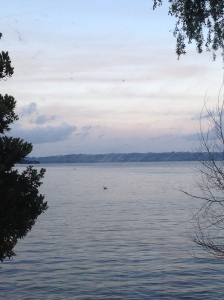 And now I am at the camping grounds, sitting outside our mobile home, blogging. Jörgen is inside the van and Jossan is at the hospital and tomorrow is a new, fresh day. Our plan is to visit Jossan athe geyser then and to look at some thermal pools. And I can tell you, there are some real thermal activity here. Everywhere you drive in this town, you see hot steam raise up here and there. Even in the backyard of some houses. Really strange feeling to see that everywhere. Makes you wonder how safe this area really is????

This site uses Akismet to reduce spam. Learn how your comment data is processed.